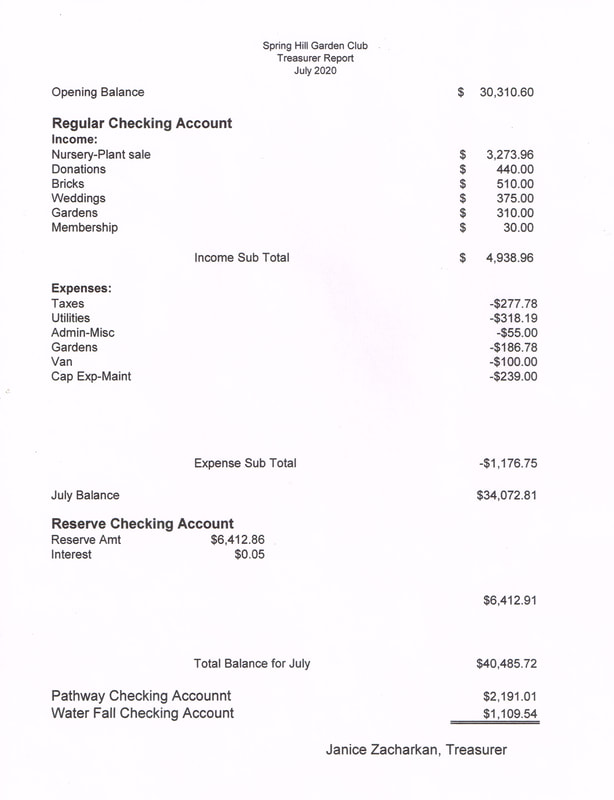 ​                   SPRING HILL GARDEN CLUB Board of Directors Meeting
June 16, 2020
Directors present: Bev (Wilcox), Ann (Anderson), Joan (Shaw), Janice (Zacharkan), Kathy W. (Wolfe), Kathryn P. (Pierson), Kathleen K. (Kohtz), Mary (Wuest)
A motion to accept the minutes from the May Board meeting was made by Kathy W, seconded by Ann. The motion was carried.
A motion to accept the Treasurer's Report was made by Joan. It was seconded by Kathy W. and the motion was carried.
In her Nursery report, Kathy W. reported a donation of $200. She used it to purchase "The Store", a cabinet displaying gardening items (i.e. gloves, clippers, etc.) for sale in the Nursery. Ann has offered to make a sign "GARDEN STORE" to place on the top of it. The "Store" is located next to the Nursery office.
Kathy reported that she, husband Joe and Mary have purchased a club van; they have had it completely vetted by their own mechanic; 2 new tires and a lot of time and expertise were donated by Joe.  Kathy will be looking for a 3rd seat to add to the van, starting at local salvage yards. Should that search fail, Janice made a motion that the Gardens fund the purchase of a 3rd seat for the club van. The motion was seconded by Joan and the motion carried.
In her Botanical Gardens report, Mary announced the completion of the latest butterfly sculpture to the butterfly garden. This was another of volunteer Tom's clever creations.
Mary also reported that a large sun screen covering a part of the Bromeliad Garden has begun to sag. Directors debated possible solutions;  one idea was to hang the shade with chains rather than rope (which can stretch)
Mary reported that new Director, Kathleen Kohtz had adopted a part of the Secret Garden. Also, the Wildflower Garden has been adopted by Carol St. Clair.
New Wedding Coordinator Ann reported that the June 12th wedding was handled very well despite the rain. The party had a Plan B in case of rain.
Bev reported some good news about the Water Fall at the entrance to Spring Hill.  The County has addressed the irrigation problem at the Water Fall. The system has been repaired/replaced and is functioning well again.  The prisoners have not done any weeding lately so there is again the need for help in keeping the weeds under control.
Other issues discussed were: replacing the deck in the Asian Garden.  Estimated cost is $3500. As the Asian Garden is used often for weddings, it must be kept in good condition. Janice made a motion that we  pay $3500 for rebuilding the deck in the Asian Garden. Joan seconded and the motion carried.
Kathy W. reported that she is still planning the October Plant Sale. Because of the pandemic, the April Spring Sale was cancelled and the Nursery was closed.
A motion to adjourn the meeting was made by Janice, Ann seconded.
Respectfully submitted,
Joan G. Shaw, Secretary 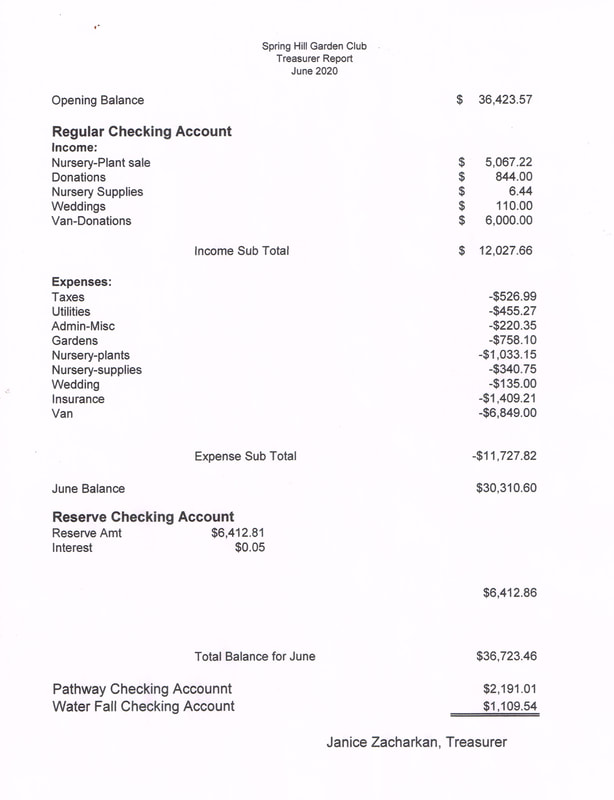 ​                            SPRING HILL BOARD OF DIRECTORS MEETING
MAY 19, 2020
Directors present: Bev Wilcox, Ann Anderson, Joan Shaw,Kathy Wolfe, Kathryn Pierson. Guest Mary Wuest. The meeting was held in the botanical gardens (Picnic Garden) and covid19 restrictions were observed.
Minutes from the February 18,2020 Board Meeting were e-mailed in advance. A motion to accept the February minutes was made by Kathy  and seconded by Kathryn. The motion carried.
Treasurer's reports were also e-mailed in advance. A motion was made to accept the February 2020, March 2020 and April 2020 Treasurer's reports by Kathy and seconded by Kathryn. The motion carried.
In her nursery report, Kathy  remarked on the finished make-over of the greenhouse, including the new tables. The task was done by volunteers and at the cost of about $230. She  is also planning to have her crew construct a carpenter's work bench. It will fit in behind the office.
Kathy also pointed out the "Halloween" tree, the big old oak that had been scheduled to be removed due to insect infestation.  Instead,the tree surgeon trimmed off all the dead limbs and the tree  is making a comeback with 6 or 7 vines started at it's base.
Mary reported that the "wood spirit" tree is dead and the section with the sculpture has been removed  as we hope to be able to preserve it and relocate it.
There is a new butterfly sculpture in the Butterfly Garden, created by volunteer Tom Howard.
Bev reported that little is being done at the Waterfall. Prisoners have not been working there recently and the county has still not found the time to repair the broken irrigation system, or replace the broken switch box. Therefore, watering must be done by hand.
In April, via e-mail Directors empowered Kathy W., nursery manager to look into the purchase of a van for nursery use.  She has found several new plant sources and those plants can be inspected, chosen and transported  by her, at her convenience without paying shipping costs. After discussion, it was decided that she should continue looking for a suitable van.
Directors also opted to continue having Board Meetings throughout the summer at the botanical gardens.
Joan made a motion to adjourn, Ann seconded the motion which carried.
Respectfully submitted,
Joan G. Shaw, Secretary 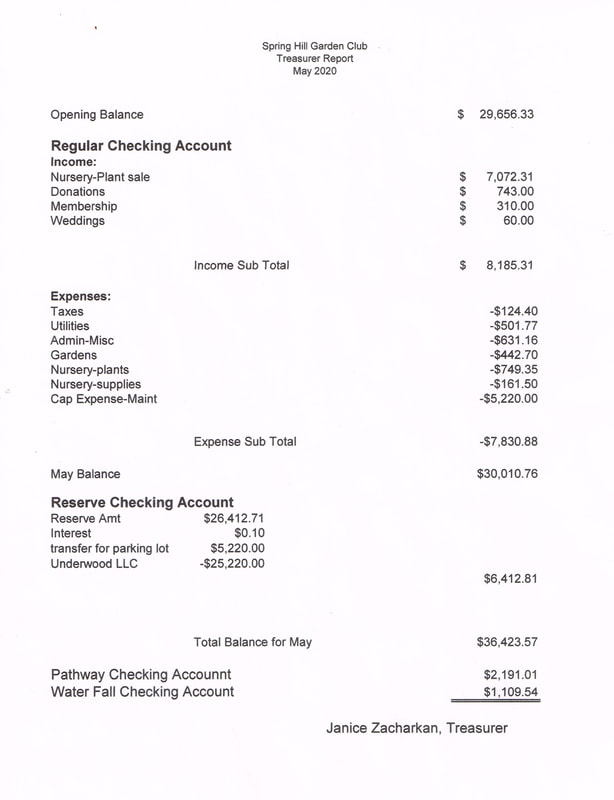 March and April 2020  meetings cancelled due to Covid 19 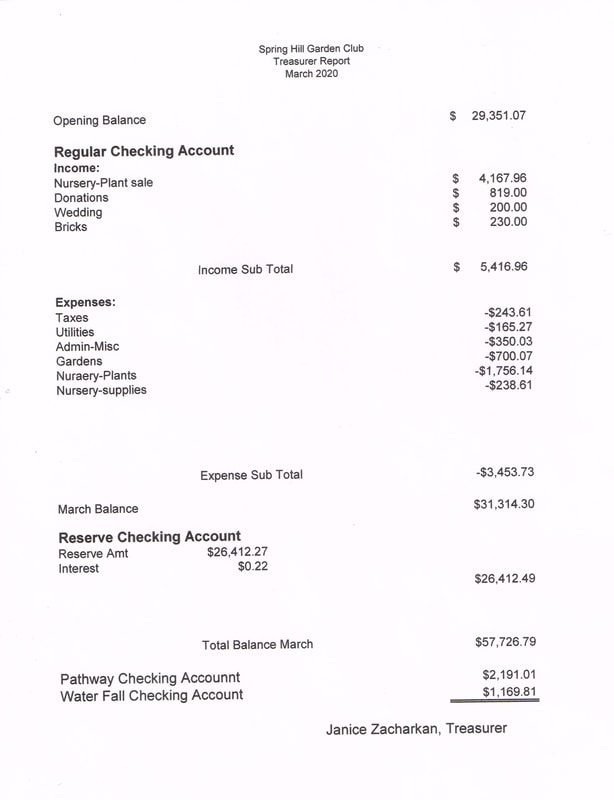 ​                         SPRING HILL GARDEN CLUB Board of Directors Meeting
February 18, 2020
Drectors present: Bev Wilcox, Ann Anderson, Joan Shaw, Janice Zarchakan, Kathy Wolfe, Kathyrn Pierson, Angela Benschneider. Guest: Mary Wuest
A motion to accept January minutes as written was made by Kathy W., seconded by Ann. The motion carried.
A motion to accept treasurer's report with changes as discussed was made by Kathy W., and seconded by Kathyrn. The motion carried.
Kathy's Nursery report revealed that sales are up, dramatically, compared with  past Januarys. She mentioned the cyprus knees which sold quickly. Tables in the greenhouse will have to be replaced. Volunteers will provide the labor.
In her Botanical Gardens report Mary said that  A TO Z  did an execellant job on problem trees. They will finish 3 more tree removals . Chips will be spread on the mulch parking lot.
One of the trees removed was the red bud "Tree of Life" at the gardens' entrance due to insect infestation.  The tree will have to be replaced, not necessarily by another red bud.
On behalf of anonymous sources, volunteer Tom is proposing a $1000 trades scholarship.  Recipient will either be enrolled  or planning to enroll in PHCC. Bev will contact school counsellor(s) for a B-C level student(s) who meet the criteria* ( to be determined). Directors will then choose the winning student and $1000 will be paid directly to PHCC.* Criteria yet to be put in writing.
Mary announced that the train will no longer run during weddings.
Bev reported that the prisoners worked the previous weekend at the Waterfall and did a great job. There is still no change on the broken irrigation system.
Directors considered upcoming election of officers. Angela will need to be replaced as director. Directors were urged to find a worthy candidate for that job.
The Volunteer Worker Luncheon plan was discussed. The concept is to reward the workers (not necessarily members) and it has the possibility of including 50-60 people. Janice will check with a caterer who did luncheons at Forest Oaks church years back. The date for this luncheon is set at Wednesday March 25. Rain date Wednesday April 8th.
The Computer Club has asked for a speaker at one of their meetings. Kathy W. indicated she is available in June.
Janice will shop for a new mic for our general meetings. Meanwhile, Kathy W. will see if she can fix the old one.
A motion to adjourn was made by Janice, seconded by Ann. The motion carried.
Respectfully submitted,
Joan G. Shaw, Secretary 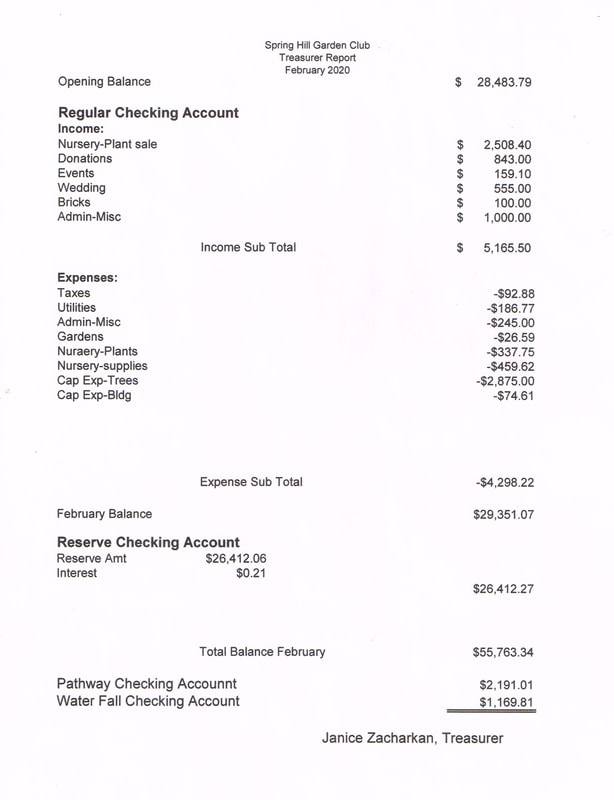 ​                              SPRING HILL GARDEN CLUB Board of Directors Meeting
March 19, 2019
Directors present: Kathryn Pierson, Joan Shaw, Janice Zacharkan. Guests: Mary Wuest, Dee Morrice, Tom Howard.
A quorum  was not attained.  The meeting was held for necessary discussion only. Decisions would be resolved by on-line voting at a later time.
Janice announced that 3 more donations to the paver fund were made: $1,000 (Pickleball); $3700 (anonymous) and $500 ( Knollenbergs)   The final phase will now be scheduled for completion.
Tom will be purchasing and dedicating 3 trees: one will be a cherry tree for the Asian garden.
Mary said that the grass garden is now managed by new volunteer Michelle. Michelle would like to do a water feature.
Dumpster pickup @ 2 times per week has been erratic. February and March are our biggest clean-up months. The remaining 10 months, one pickup per week was satisfactory. Consequently we currently have built up a large pile of limbs separate from the dumpster. Janice suggested that we might be better served by going to a larger dumpster. However, there would be a start-up fee if we changed dumpsters/ companies.  Janice will get price quotes and the matter will be presented to the directors via e-mail.

The motion to adjourn was made by Mary, seconded by Craig and carried.
Respectfully submitted,

Joan Shaw, Recording Secretary
​SPRING HILL GARDEN CLUB BOARD OF DIRECTORS' MEETING JANUARY 19, 2016
Those present: Kathryn Pierson, Craig Samuel, Doug Brainard, Joan Shaw, Janice Zacharkan, Mary Wuest, Jeanne Erickson. Guests: Laurie Samuel, Rose Donaldson, Jim Erickson, Kathy Wolfe, Carol Warren
The November Secretary's report with correction "CD player", not "CD"was approved by a motion made by Craig, seconded by Mary. The motion carried.
The November Treasurer's report was approved following a motion  made by Craig, seconded by Mary and carried.
A motion to approve the purchase of new benches for the nursery for $2061.55 plus shipping of $250-$300 was made by Craig and seconded by Joan. Motion carried. Janice stated this expense would come from capital expenses.
Mary reported that she contacted 2 arborists, both recommended by the County Extension service to evaluate the health of our trees. One, a representative from "Goods Arborist Solutions, LLC" would charge $25 per hour for an in-depth evaluation of tree health in the gardens. He thought it would take 20 hours to do so. The second arborist, Ken Morgan did an on-sight evaluation, free of charge. Mary also said that Dave Hanby has offered to do many of the recommended trimming/removals. Mary will go back through the gardens and make a list of "must do" tree targets and also get estimates from several tree removal companies.
The Pet Lovers Club of Timber Pines would like to meet in the Picnic Garden on the 2nd Thursday of March (10th). They were asked to keep their dogs leashed and would be responsible for any cleaning-up. The club raises money for pet adoptions.
Laurie and Craig presented their plans for Earth Day, April 23rd, a Saturday. A
Celebration of Butterflies" will heighten awareness of the garden club through a variety of events centered around butterflies and their contribution to the environment.
A thank you letter from Historic Hernando Preservation Society, in response to our donation, was read.
Other topics presented for discussion: our plant sale April 1st and 2nd. College student volunteers will be coming to the gardens in Mid to late February.
Sunshine Irrigation company will be mapping the sprinkler system for us at no charge.
Janice suggested a demonstration by Turluck massage at a pot luck dinner April general meeting. Discussion as to it's relationship to the objectives of the garden club. Motion to approve the speaker was made by Doug and seconded by Craig. Motion carried.
Kathy Wolfe will present a brief tutorial on the Nature Coast Botanical Gardens' website reviewing how members can access the site. This will be on the agenda next week at the general meeting.
A motion to adjourn was made by Craig, seconded by Mary and was carried.